What is the Endocannabinoid System?

According to the Center for Disease Control, over 50 million Americans suffer from chronic pain. This experience is nearly debilitating, and many people will do whatever they can to reduce their pain. Unfortunately, this leads many people to get stuck using opioid pain medications that have harmful side effects. Thankfully, there is another pain reliever that does not affect the opioid receptors and works with the endocannabinoid system instead.

A recent study done by Harvard Medical School discovered that the most common use for medical cannabis is for chronic pain as it offers a strong relief, which improves the overall quality of life.

The only question is, what is the endocannabinoid system, what is its function, and how can knowing about it make you feel better?

We know about the importance of understanding the endocannabinoid system, so we created this informative guide to teach you everything you need to know. Keep on reading to learn more.

What Is the Endocannabinoid System?

The name came from the mix of two words, “endo” which is short for endogenous, which means that it is produced naturally in the body. The other word “cannabinoid”, which comes from cannabis.

This may have you wondering “is the endocannabinoid” system real, if it got its name from cannabis?” This means that this system creates naturally occurring cannabis-like substances, without the cannabis needed.

Because of the discoveries of the endocannabinoid system, researchers were able to identify why and how cannabis can have medical-like effects on our health.

When Was the Endocannabinoid System Discovered?

The endocannabinoid system was declared an existing system in the body in the 1980s. The extensive research was by Dr. Allyn Howlett with St. Louis University. In the 1990s, they were able to clone the cannabinoid 1 (CB1) receptor in rats. Since then, there has been thorough research on the specific receptors to better understand the system as a whole.

They have concluded that the receptors are not just there because of how they respond with the plant, they exist because they are an important component of our natural processes. We already create the compounds, and cannabis just accelerated that experience.

What Does the Endocannabinoid System Do?

There is still extensive research being done on the endocannabinoid system, however, scientists have been able to conclude some of the ECS main functions.

Some of these functions are:

In order for these functions to operate smoothly, there are three main parts of the endocannabinoid system that work together to achieve homeostasis. Homeostasis is your body’s self-regulating process to maintain stability in different environments.

Enzymes help to break down the cannabinoids and endocannabinoids once they have performed their function. This helps to rid of cellular waste and rid of anything not needed within the body. The main enzymes are monoacylglycerol acid lipase and fatty acid hydrolase.

Endogenous cannabinoids are similar to cannabinoids, yet instead of coming from a plant, they are naturally made in the body. Your body will only produce what is needed when it receives the signal to do so.

The two main endocannabinoids are 2-arachidonoylglyerol (2-AG), and anandamide (AEA) which both help to keep your body’s system operate seamlessly.

What is Endocannabinoid System Deficiency?

While it is still being researched, some scientists believe that low levels of endocannabinoids in the body can lead to certain conditions. One study in 2016 discovered a link between low endocannabinoid levels and fibromyalgia, chronic migraines, and irritable bowel syndrome.

The Endocannabinoid System With CBD and THC

CBD (cannabidiol) is the other major cannabinoid in cannabis. Unlike THC, CBD does not have any psychoactive effects, nor any other unwanted side effects.

Scientists believe CBD helps endocannabinoids to have more effects on your body. This is because it can prevent them from breaking down. This is still under research as to how exactly CBD helps the ECS, which could be possibly a new receptor that has yet to be discovered!

While CBD may feel more settle, THC (Tetrahydrocannabinol) on the other hand, gives you the “stoners high” experience. The reason why it feels much more powerful is that it binds to both receptors, instead of just one.

Because of this, people claim to have more side effects than with CBD. This means that while CBD helps to reduce anxiety, THC can provoke anxiety and paranoia.

Learn More About the Endocannabinoid System

There is still a lot of research to be done on the endocannabinoid system, yet there is a lot of evidence to show that it is an essential part of our natural processes.

To learn more about the benefits of medical cannabis and enhance your endocannabinoid system, feel free to contact us to learn more.

get the latest news & info from bragg canna 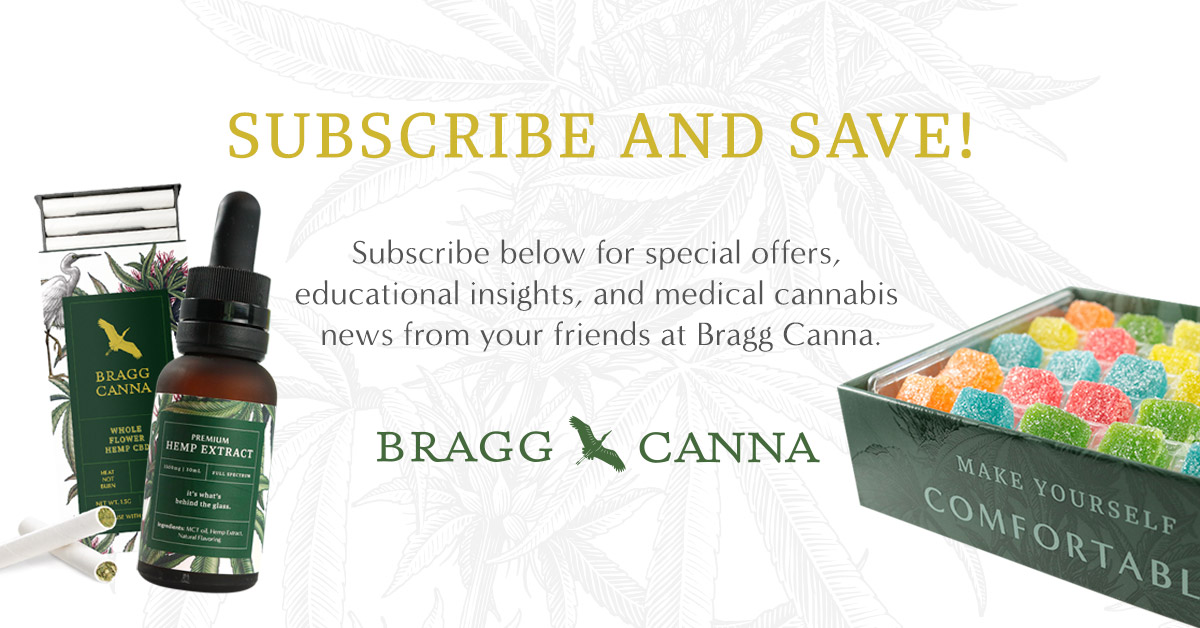